A recent Friday afternoon saw the local gang laying down a recent acquisition of Tom's from an auction at the excellent Lake Geneva Games store.  In this case, since he got more than one, I am discussing Praetor (2014).  Along with Wendy, three of us sat down to try this game out. 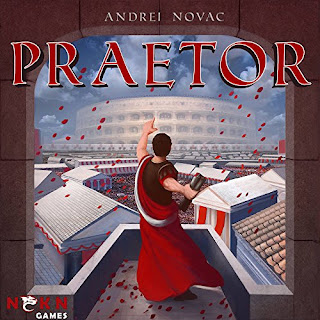 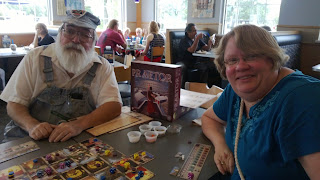 Always keep an eye toward the best three ways you can maximize your points for your next turn.  If you manage not to be doing the third way, you stand a good chance of winning.  Take advantage of the market but try not to telegraph your moves.  This can be tough because it can, at times, run counter to maximizing your points but being too obvious can lead to dead turns and excess resources toward the end with no way to recover.  It doesn't hurt to appear flexible enough to steal an opportunity from another player even if you have no intention of doing so because your own best moves means more points.  It keeps them focused on their game more than yours and discourages them from using a turn to mess with your strategy.  It also does give you more outlets should things turn against you.  Even though the theme is mainly about the wall building, I think a large workforce is a must and owning lots of buildings pays off in many more way, from the start to the finish.  Get used to the building tile corners and be sure you can see them clearly to avoid missing any stray chances to gain some extra few points here and there.  That's about it from me on this one except to say that I'd play this game at least a few more times.  Intriguing and challenging.  Try it out! 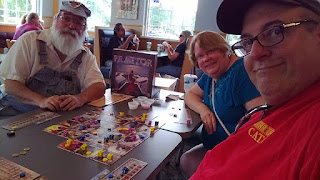