My buddy John got hold of a copy of AquaSphere (2014) at the Gaming Hoopla just this last Spring.  He told me it looked good but was tough to tackle at first.  I scoffed, inwardly, and suggested he bring it by a local game day.  He did.  He, I, and another had at it but halfway through the other dropped out.  We persevered and finished the game with some adjustments while definitely getting some things wrong.  It's a tough game to approach.  Undaunted, we immediately set it up for a second game with just us two players.  Again, I am not sure we fully got everything right.  Just a couple days ago, we had the chance to try it again but with four players.  We got a couple things wrong but consistently so.  We *will* get things right the next time.  Yup, there will be a next time. 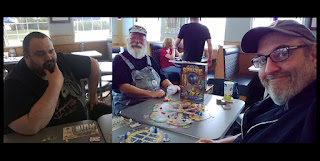 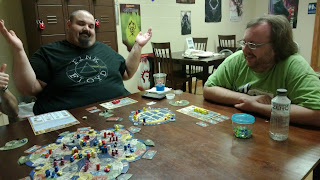 I won't lie; this game tries hard to get in your way when you want to play it.  It's got rules that are hard to keep in mind, it has tons of fiddly-bits, the initial setup is not fast and the repeated setups between phases during intermediate scoring aren't "friendly" either.  If someone gets through these aspects, and gets used to them, it can certainly be a rewarding play experience and a very fun game.  And fast, too.  This game should be very fast for folks who are familiar with the setups.  I could see two-player games of this being knocked off in a half hour.  I'm not kidding. 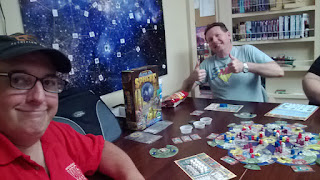 But where does this leave the game for the average player or collector who wants something he can pull off the shelf from time to time and play with new people?  I'd still recommend it.  It would require that the game owner know the game well and handle all of the setups.  Bit of a "I'll take care of this, don't you bother learning this stuff, here's what *you* need to know to play."  A hockey player might know how to run the Zamboni but it's not a requirement.  The pay off from playing AquaSphere more than makes up for how difficult it is to approach.