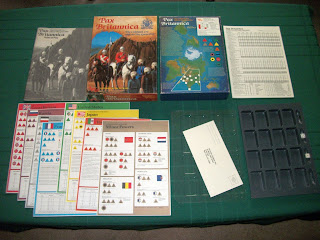 Pax Britannica (1985) is a Greg Costikyan wargame published by Victory Games.  It depicts the "Great Powers" of the world as they "vie throughout the world for the wealth and esteem conferred by vast colonial holdings in the far-flung corners of the Earth."

The full description on Board Game Geek is as follows:


A multi player game of empire, diplomacy, and global confrontation. The Great Powers of Great Britain, France, the US, Germany, Austria-Hungary, Italy, Russia, and Japan vie throughout the world for the wealth and esteem conferred by vast colonial holdings in the far-flung corners of the Earth. Each player maneuvers his administrative and military assets to establish control over the choicest and most strategic areas, keeping a wary eye toward encroaching opponents whose colonial ambitions are every bit as great. Conflict between national wills is more often resolved through peaceful negotiation than through war; but when national honor is too severely tried, war can occur- on a scale that threatens to evolve into the War to End All Wars!

The maps for this game are pretty damned nice and plenty large enough to give that big game feel. 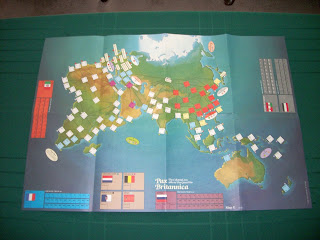 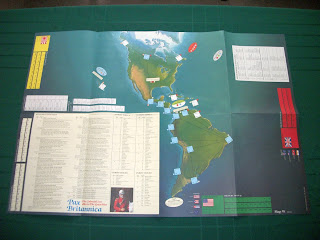 This a big game, and a long one.  Not as long as some I've played but certainly longer than most gamers of today will deign to play.  BGG says "300 minutes" but unless you've played a few times expect it to run longer.  I've asked a few friends to join me in it and have gotten a few to agree.   It suggests a minimum of four players and up to seven.  The players sheets are double-sided and packed with information. 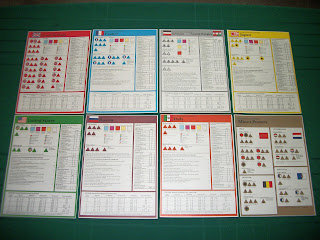 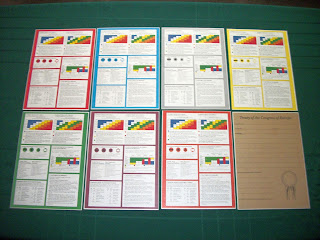 But, of course, you can often count on YouTube's calandale to have a video for a long wargame and he did not disappoint.  That's not a criticism.  The man is thorough and for my time, I'd rather it be well-spent with thoroughness than spent on a dozen shorter videos of a game like this that tell you next to nothing.  So, to calandale, I say, "Huzzah!"  I've made a YouTube playlist of his Pax Britannica videos and the whole thing lasts about four hours.  You can check out the last one for his review, if you like, though after watching the full set of videos, you'll get more from the review.  I share just that review video now.


In anticipation of a revamp of this game (Greg Costikyan has mentioned on Facebook he is revising Pax), I picked up the original.  I dabbled with many games of this type back in the early 1980s but by the mid-1980s I was leaning toward limiting my hex-and-chit-board-wargaming and my miniatures wargaming to Ancients and Medievals, with an exception for games with a Tall Ships theme.  So while I was aware of this game and saw it played at events, I never sat down to a table with it myself.  Until now.  Recently, I happened upon a copy of the game for a reasonable price on eBay, so I snagged it.  I'll do a run-through of the game on my own before trying to teach it to anyone else, of course, as it will be a long enough day with only one of us knowing the rules.  Did I mention it has a lot of counters and I need to sort them due to spillage in transit?  No matter, as it is a good way to become familiar with a wargame, I have found.  I'll post again about this game further down the line as I learn more. 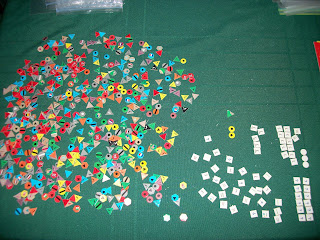 The sun always sets on a guy sorting counters . . .  Thank goodness the counter sprues were included in the game to aid me! 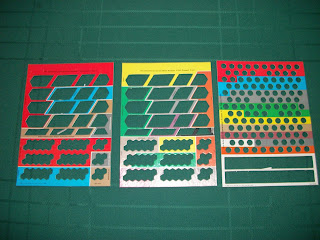