Systems Saturday - Railways of the World: The Card Game (2010)

We've played quite a few games of Railways of the World series locally and have long been planning to try out Railways of the World: The Card Game (2010) but it only recently made it to the table.  We were both impressed and in love with this game right from the start.  It has a lot of similarities to the board game but some innovations that increase the speed and flexibility of the game concept.  It also seems to find a way to make gameplay even more balance over the beginning and middle of the game leaving it to the individual player to set up a final scoring that can clinch the victory. 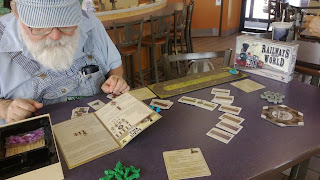 As the game progresses, players work to connect more cities, upgrade their engines for larger carrying capacity and deliver goods through a network of routes across the table. 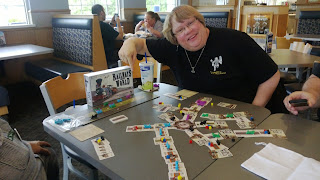 A couple of us be broke this game out on one day, checked out the rules, and planned a game for later in the week, then we played it twice.  We had the expansion available to us (and the game, thanks to Tom), but stuck with the basic games for both times through.  Although I don't think it significantly upset play, we did have one rules regarding the drawing of wild cards / engines a bit messed up, but all played with that same misconception and it didn't affect play.  We'll correct that on future playings.  Part of the enjoyment of the game comes from being in the running right up to the end.  It's not that the game forces the balance but rather than multiple approaches keep players from getting boxed out of scoring and building their rail lines, plus the scoring differences from the board game ensure that isolation doesn't allow for runaways.  We will definitely play this one again and I don't think gameplay takes more than an hour, so several games of it can be had each time.  This should also more quickly facilitate our rules and strategy mastery. 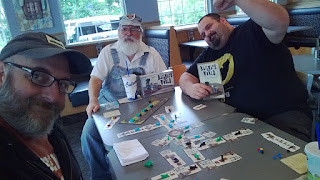