In 1969, the Benson Barrett Corporation released a series of correspondence seminars on writing designed to make the job of the author as easy as possible.  Included with "SEMINAR FOUR' was some supplemental material known as "Deal-A-Plot Cards."  To say this flies in the face of everything I was taught in college about writing, both while gaining my undergraduate English degree and during my graduate studies in a Creative Writing MFA program, would be putting it mildly.  I have similar trepidation about introducing these as GMing device for roleplaying games.  Storytelling Games are another matter entirely, and I do not profess the same concerns there.  Nor do I have trouble seeing how someone running an RPG with heavy Storytelling Game elements could utilize these in creating twists and scenes for their players to exploit.  However, there is a place for them in traditional RPGs when it comes to setting creation and NPCs.  I will elaborate. 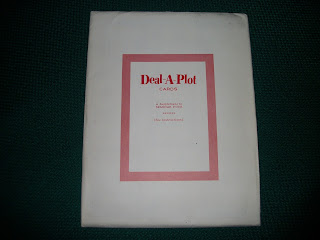 In a traditional RPG there is no plot, and no story for that matter.  There is a setting and there are characters, but plot and story are elements that come about through gameplay and can only be discerned once gameplay has commenced and resolved.  As such, any attempt to force a plot through the use of a Deal-A-Plot type of system on a tradition RPG would be stacking the deck against the purview of the player characters.  It is the players, through their characters, that determine the course of action and eventually what story will develop and become evident.  However, within the setting there are a multitude of non-player characters and they all need motivations and goals.  Mostly these can be developed by the GM based on what he thinks sounds reasonable within the setting, and most will have mundane goals and ambitions, to be sure.  A farmer typically is going to be concerned with his farm and not much else.  If every farmer in a setting was bent on world domination, it would be a chaotic and ultimately unsatisfying game. 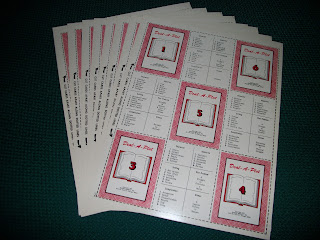 Eight Deal-A-Plot Card sheets came in the seminar packet, each with nine cards.  Each card included six sections: Character, Adjective, Setting, Complication, Plot Problem, and Climax.  It is worth noting that the section on Setting would be considered a micro-setting for our purposes, a portion of a game setting, such as an Abandoned Mine.  The first four of those categories each have six options.  Without a precise tally, I have looked them over for any duplication and have found that each entry appears unique.  While I only looked for a few in particular like Mother, Father, and Child, I found that those occurred but once, though there were some variations like Stepmother, Mother-in-Law, and Grandparent.  With seventy-two cards, that means the four sections with multiple entries each have a total of four hundred thirty-two results.  If one did not simply use a single card to deal a plot and only pick the corresponding numbers on that card, one could generate hundreds of thousands of results.  Even writing a short story on each combined result would take many lifetimes.  So, too, the potential for coming up with unique NPCs for any game is astounding (in the case of these cards, a modern RPG NPC). 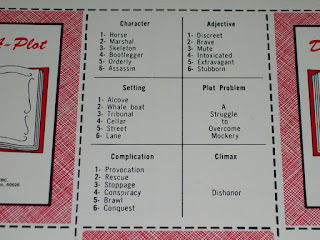 Although I realize there are some similar systems already being provided to the RPG market, I may well have to come up with a system like this; at least for myself if not as a CMG offering some time in the future.