A couple of Saturdays ago, I took a trip down to The Gift of Games, a fine FLGS in Grayslake, IL, where Michael Shorten was set up to run a Chaos Wars demo.  Chaos Wars is a set of Medieval Fantasy miniatures rules originally put forth by Ral Partha Enterprises and now revived by Iron Wind Metals.  They had started off being known as Rules According to Ral but have been updated a bit over the years.  You can download the free rules from their website download section.  the minis, you need to purchase but they're quite reasonable and have that Old School feeling to them, being true 25 mm figures, as you might suspect. 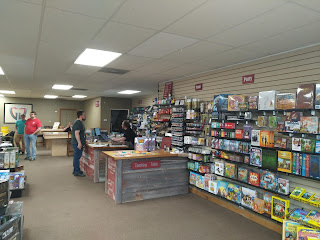 Tim has a clean shop that is a lot more open than the previous game store that utilized this space (Unique Gifts and Games). 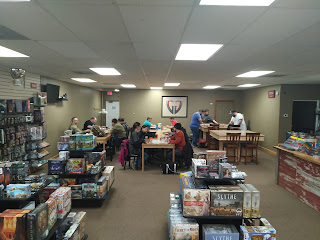 Gaming toward the back with retail space in front and plenty of both. 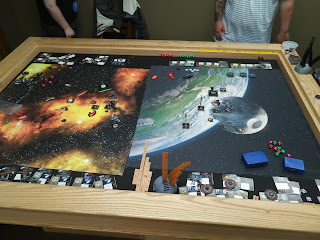 He's got some fancy tables with inset play areas, too. 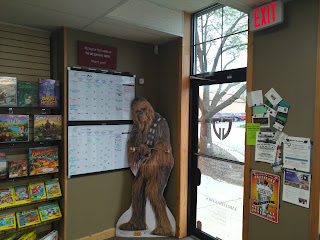 It was a little eerie seeing Chewbacca guarding the exit only a week and a half after Peter Mayhew had passed. 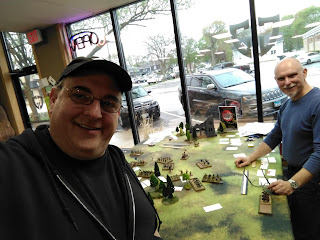 It was a rainy day outside but we were playing a minis wargame so all was right with the world. 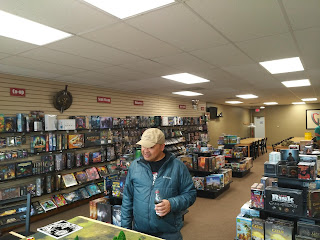 Ed stopped by to check out the action. 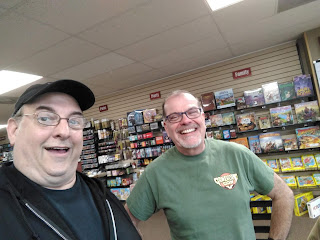 And Chris, who also plays in Michael's regular D&D game popped in too. 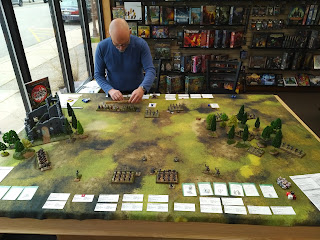 When I arrived, Michael was just completing the set up and since the forces of evil happened to be nearer, I felt obliged to play them. 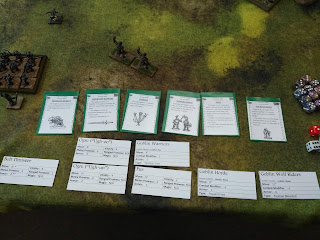 The way he had each unit on a 3 x 5 and the spell cards ready for casting made the demo quite smooth. 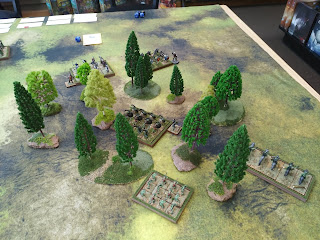 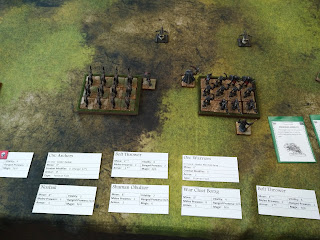 He has a great collection of figures, all painted and based to perfection.  He sent a flying panther in to try and harass my wizard early on but my archers had some great dice and peppered it from the sky. 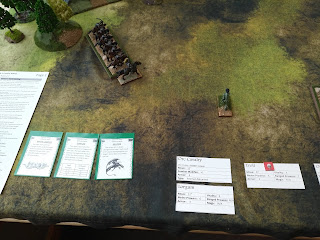 I played a little cat-and-mouse to get as much damage out of my artillery as I could without allowing my infantry, archers, or cavalry within range of his siege engines. 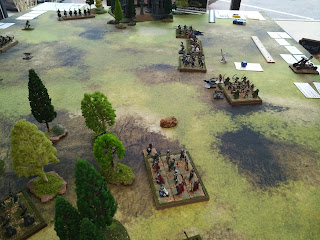 I used my quicker troops to draw some of his forces to my left . . . then ran full on to the far right side of the battlefield, bringing the forest into play for my goblins, while tempting him to divide his forces to either side of it. 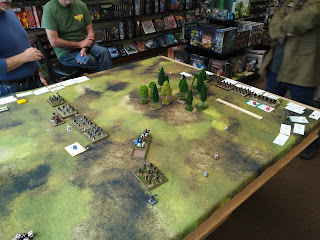 As he moved forward, toward me, I rearranged my troops to try and gain some strength advantages. 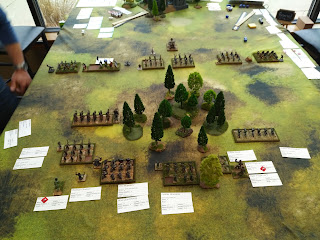 With my cavalry and heavy orc troops to my left, and my goblins to the right (being supported my some ogres), I edged a little closer being careful to keep at least a single move away from his fastest units. 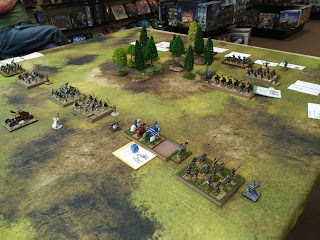 His open formation gave me a chance to try and steal a march on him and force some advantageous match ups for me. 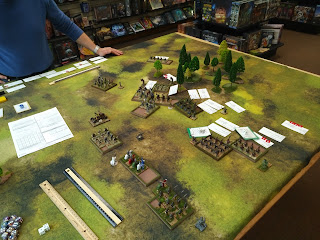 When I finally got initiative, I moved my goblins through the forest and engaged his left, bringing my archers forward to do a little more damage to his cavalry.  The archers were chewed up but not before some excellent rolling halved his horse. 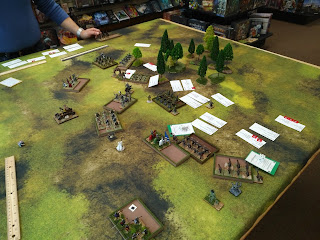 As time ran down on our scenario, we were both taking heavy losses and some good dice either way could have sealed the deal for either of us. 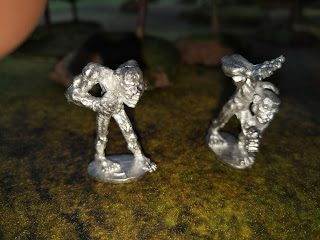 Michael was kind enough to grant me a couple of minis from his unpainted figures box and I chose a couple of "flesh golems," or at least that is what I intend to use them as.  Thanks, Michael Shorten, for being an excellent demo instructor and thanks to Tim of The Gift of Games for hosting the event!