Of course, I've played and posted about Fief: France 1429 (2015) before but it feels like forever since I've played so when I managed to wrangle a Sunday off so I could join Wayne and the gang at A Gathering of Gamers at the Elkhorn Pizza Ranch on Third Sunday, and when he further decided Fief was hitting the table, I jumped to grab one of the open seats. 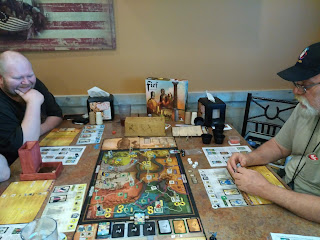 The reason this under Nostalgia Thursday is because it is based on a game that was first published as Fief (1981), revised and republished as Fief 2 (1989), trotted out again as the revised and streamlined Fief (2011), then finally upgraded and published in its current rendition.  I'll describe our Fief game a bit more toward the end of this post but first allow me to recap some of what else what played at A Gathering of Gamers in May. 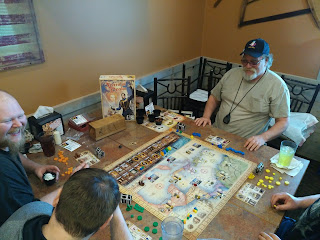 When I arrived just after 11 am, Wayne had Francis Drake (2013) ready to go with Curtis, Creed, and Rob.  I've never had much luck with this game, so I didn't jump in on it and opted to join some others for an early game of something else, planning to rejoin that table for Fief in the second half of the day. 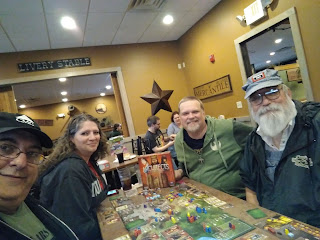 Instead, my day began with a game of Architects of the West Kingdom (2018), which I've played quite a bit lately but still enjoy quite a bit.  I played with Tom Wham along with Julie and Chris who I love gaming with whenever I can.  They're both tough opponents whether we play something we've played before or even something new to them! 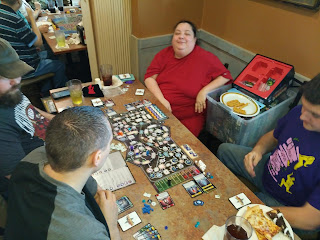 Robie had a crew playing Clank! In Space! (2017) which I have yet to play but looks like a lot of fun. 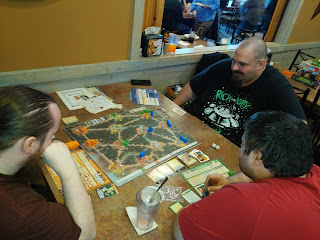 Rich, Carl, and John joined one another for some Root (2018) which John can't seem to get enough of. 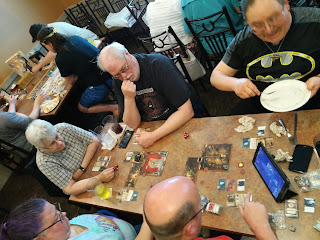 Laura, Nancy, Joe, James, and Brad were adding in some tech to a game of something, perhaps, Cthulhu-esque, or maybe horror-oriented, I am not sure. 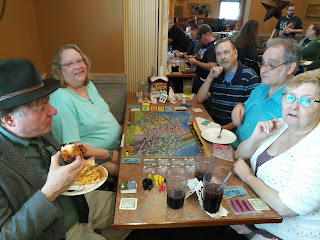 Wendy presented a mystery game to Harold and company a bit later but first played some Power Grid (2004). 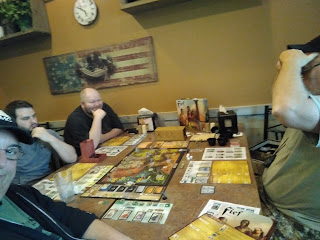 But, finally, Wayne got Fief: France 1429 (2015) to the table and I crowded Wayne's opening position to pressure him into an early alliance.  My penchant for only drawing female nobles, and the lack of them early on elsewhere in the game, helped me convince him to wed one of his lords to my first lady.  Because he also had military pressure from the far side of the board, he never thought it would suit him to break our alliance, and we wound up with a shared victory.  Creed and Curtis both played great for their first time but were severely hindered by bad dice rolls both during conflicts and when resolving events.  I think their lead units were either decimated by famine or stymied by bad weather two out of every three turns.  It left Wayne and me the opportunity to build a tremendous economy in the west and top out our armies, then seize the throne for a final victory point.  It was a trial by fire for those two fellas and I dare say they will be out for blood when next we meet.