I've been getting the itch to do some painting and crafting again so I picked up a fresh set of paints from The Army Painter.  I ordered the set through Lake Geneva Games to garner the special order 20% discount, since it isn't something we generally keep on the shelf.  We stock the individual Reaper Master Series paint line, which I love, but so many of my old paints were suspect so I thought buying a big set to jump back in would be a good idea.  In the end I chose The Army Painter Warpaints: Mega Paint Set 2017.  I also got some brushes, a citadel paint handle, an inexpensive paint carrying case, and a wet palette (something new for me!).  Hopefully, I can start to slap some paint on some minis soon.  I've got oodles of figures I've picked up over the years with plans to someday paint them, so I just need to decide and make the time. 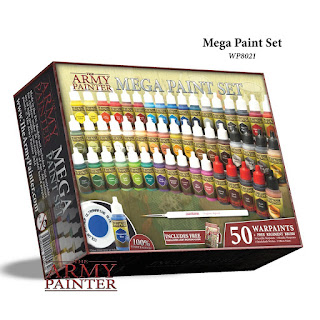 In fact, I think I have just the figure in mind.  It's an old one I got in a small lot at a Games Plus auction maybe a decade ago and it's the same sculpt I used long ago (c. 1980s) as a regular NPC henchman or hireling because he doesn't brandish a weapon and is outfitted with a backpack and numerous pouches and other gear.  I used to jokingly refer to him as The Patsy, in part as a homage of King Arthur's coconut-wielding sidekick in Monty Python's Holy Grail and also because I would often target him first if the group was ambushed or when they sprung a trap.  He was not at all afraid to be killed in nasty ways, despite him not being Brave Sir Robin.  I'm quite happy to listen to any advice you might have on this renewed effort, so please chime in! 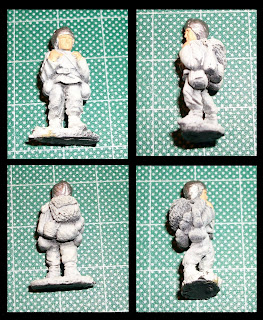