As May 2019 comes to a close, I find myself at Nexus Game Fair, which is now in Brookfield, WI.  I think this will prove to be a good move for this convention.  I've been unable to go for more than a day the last couple of years but worked out some vacation time to go for a little longer this year but more on that next week.  For this post, I want to just look back over a few of the games I played that I didn't highlight along the way.  for a few of them, I didn't get pictures but I'll be more attentive next time, I hope.  Earlier this week, Jesse broke out his newly acquire copy of Machi Koro (2012).  It's a fast, little card game with some interesting challenges, an engine-building component, and just enough ways to mitigate the dice rolling aspect to keep it from feeling like you need to be lucky to win.  Granted, being lucky can help but it can be overcome by solid strategy, so I enjoyed it.  I guess Anthony, Rick, Jesse, and I owe some thanks to Dennis for putting it in the Blind Auction for Jesse to win. 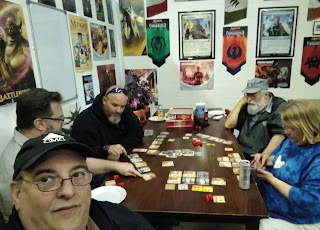 We got Rise of Augustus (2013) back to the table early this month.  I like to call this Roman Bingo.  It's amazing how tense it can get hoping your needed symbol is drawn from the bag before someone else gets what they need.  Great fun! 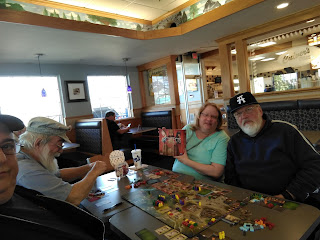 I've already mentioned Architects of the West Kingdom (2018) in other posts and I played it a lot the last couple of months but I don't doubt I will play it more throughout the summer.  It's a clever game but I think it is going to need some expansions to keep it fresh beyond a few more plays.  In this instance, we were happy Tom's longtime friend Mike Bell was in town to join us.  Don't ask him what the "A" on his hat stands for because it seems to change with some frequency.  Later in the month, but before getting in that game at the Pizza Ranch, Tom, Brad, and I knocked out yet another game of Architects! 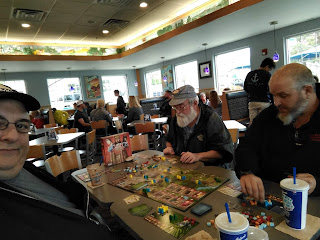 There was also a good deal of Love Letter, Magic the Gathering, Stone Age, and more squeezed in at one time or another but it's time to gear up for a lot of boardgaming and card play at Nexus Game Fair, so I say, So long," to May and look forward to gaming in June.  Go, Cubbies! 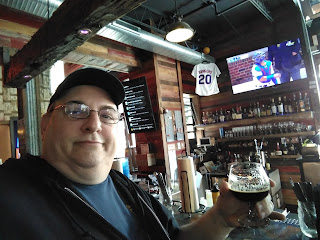