Canal Mania (2006) is a game I hadn't seen before last Friday but when my pal, Tom, brought it along to one of our weekly Culver's games, we jumped right even.  Tom hadn't even had the chance to punch the tokens on this one, so we were all learning it together.  Early on, we were scrambling left and right find ways to squeak out victory points on the scoring track and really couldn't fathom how we could get as far as the marker indicating the end game.  The longer we played, the more apparent later scoring opportunities became and I think we all did very well for a first time playing. 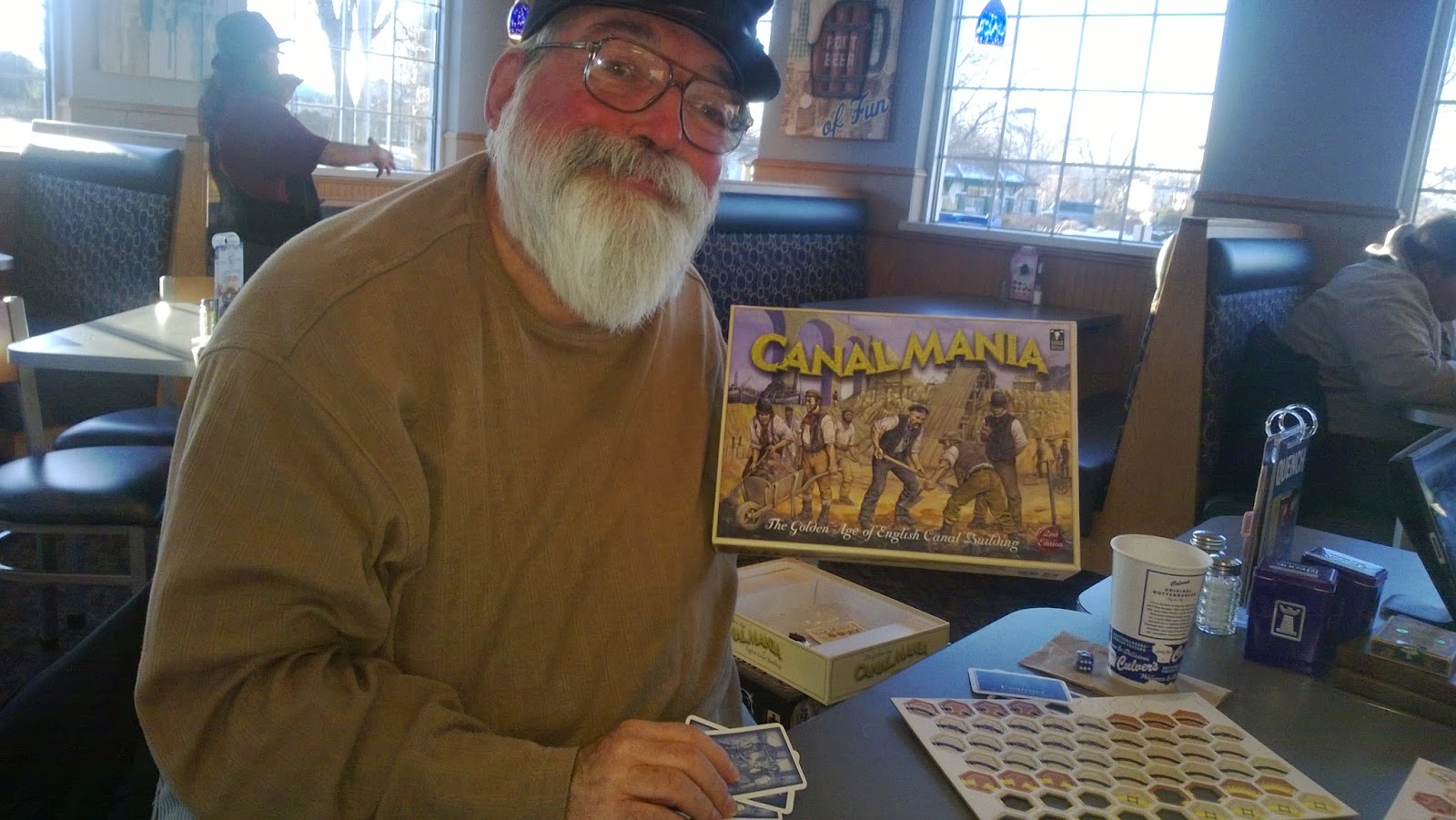 The description from Board Game Geek:


Canal Mania is a game about the great canal-building era of the eighteenth and nineteenth centuries that captures the feel of the period and gives players plenty of decision making in their attempts to complete some of the most famous British canals.
Players will engage brilliant engineers such as James Brindley and Thomas Telford in their efforts to create canals linking emerging manufacturing centers, thereby providing the waterways that supplied the goods generated by the Industrial Revolution.

Each turn has 3 phases. In each Phase you can chose one action: 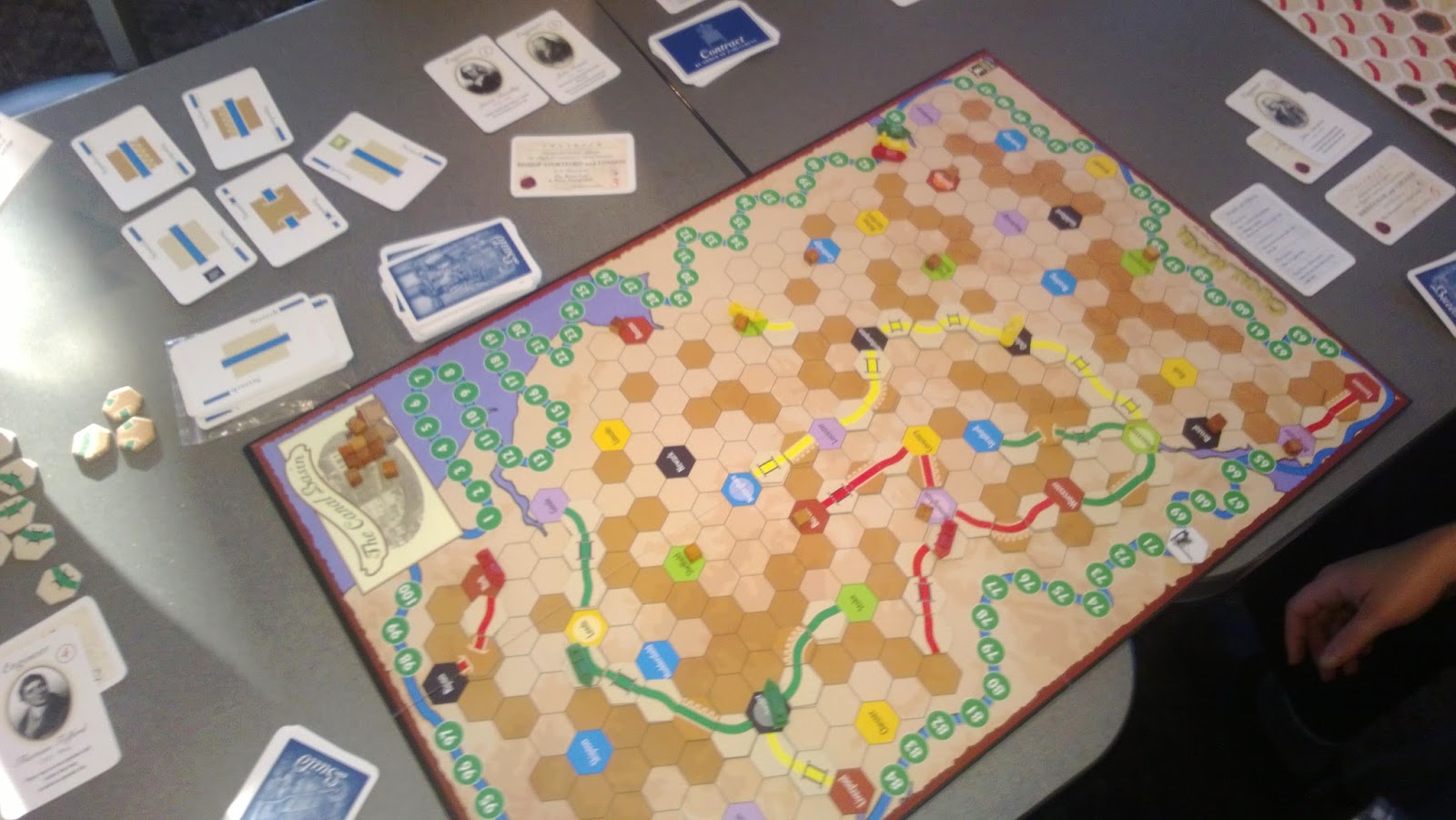 I think one of the keys to doing well in this game is not getting fixated on early one, two, and three point grabs.  This includes both moving cargo boxes one canal segment and utilizing non-stretch canal hexes when unnecessary.  Certain building restrictions will require some flexibility during canal construction and conservation of canal hexes but finding yourself late in the game unable to build a route because of a lack of canal hex types can leave you out of the running when it is most crucial, particularly if that contract is going to tie together some lines and allow for a big score to put you over the top.

Perhaps contrary to this advice, I also think it's important to look for chances to strategically switch engineers.  It can save a lot of unnecessary drawing of building cards during the first phase on various turns.

Furthermore, be careful not to choose contracts that wind up having you loop back around on yourself.  The requirement to take the shortest route when moving cargo if you have two routes of your own to choose can be a costly loss of victory points.

*Edit* We missed two rules the first time through.  We didn't realize you could not pass any color twice when fulfilling a contract nor that you cleared the board at the end by fulfilling unfinished contracts if possible.  These may well have simply offset one another in our case.

Obviously, you have to play with the cards you get but I think these strategies in combination can help build toward a healthy end game. 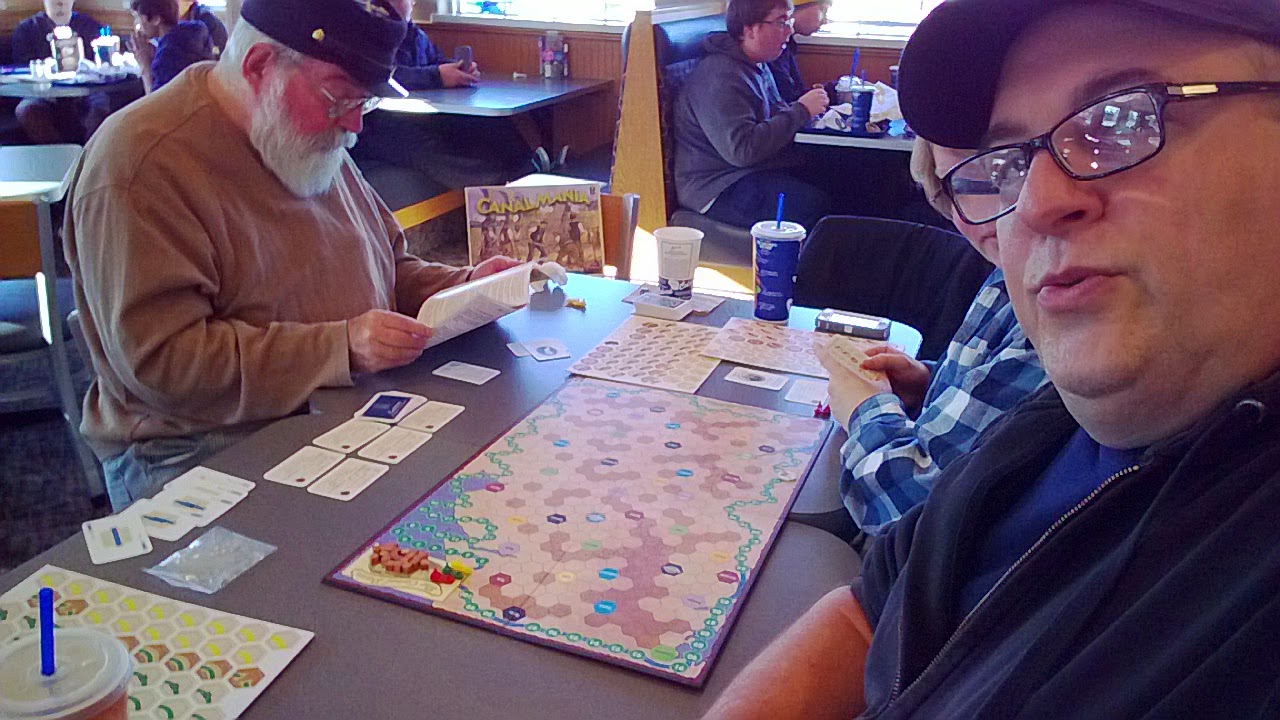