Allow me to reiterate that I love the flexibility of Hordes of the Things, particularly for building a miniatures army. Wargames Research Group did a great thing revamping their De Bellis Antiquitatis rules, originally to be used for Ancient (and Medieval) wargaming but revised for fantasy battles. The beauty of their rules for me is, in part, being able to pick and choose from across many miniatures lines to build a unique army with its own particular flavor. To that end I am building my Dwarf army.

One of the most creative parts of building an army for HotTs is coming up with a Stronghold idea.  Most are representational though you can certainly build one to scale with the army you field, these often coming in the form of a camp.  For my Dwarf army, I used some miscellaneous parts attached to a standard 80mm x 120mm base.  The idea for it began when I picked up some loose Stratego: Legends (1999) castle game pieces I found.  I added some trimmed plant stakes I picked up garage saling. 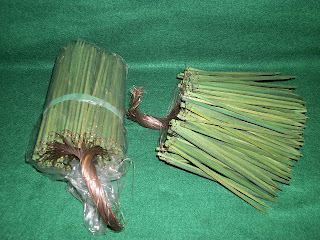 And the rest of the Stronghold developed as I pieced it all together. 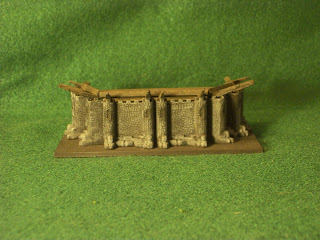 I made a semicircle with the castle pieces. 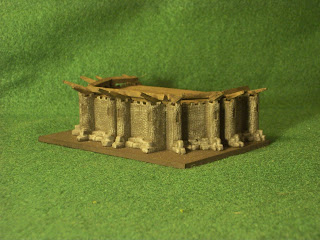 Then built up a platform in the center with some foamcore board. 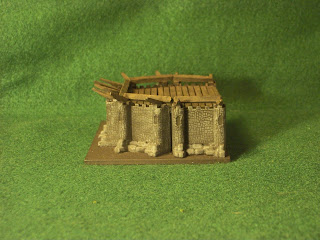 I ran some beams across the top, over the foamcore board, so it had a wooden platform, the foamcore acting only as a structural base for the wood pieces. 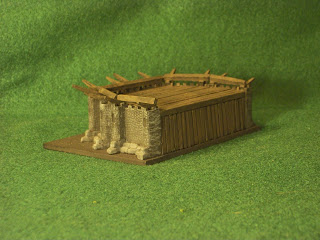 I added some guard rails aroound the platform. 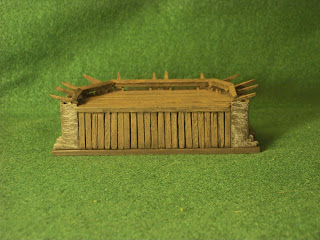 I lined the back with vertical joists. 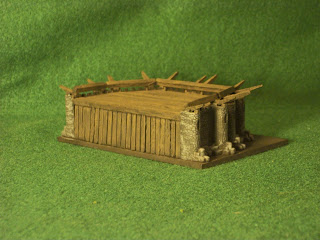 Then finished off the structure with some spiky defenses. 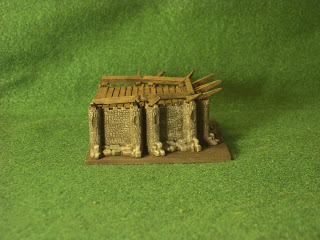 I primed the whole thing black and drybrushed the castle pieces with a few descendingly-light gray-toned paints. 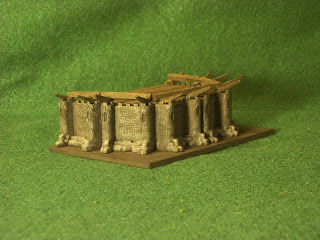 Painting the wooden stake-pieces dark brown, which were purchased with green stain already on them, I went over them again with some lighter brown to bring out the natural woodgrain.  It's a fairly simple design and while the wooden portions took some time to cut uniformly, it wasn't very difficult.  I may add some lichen to dress up the base but it is perfectly playable as is.  Just as a contrast, here is an even simpler Stronghold, though not for this army, that I threw together with garage sale finds. 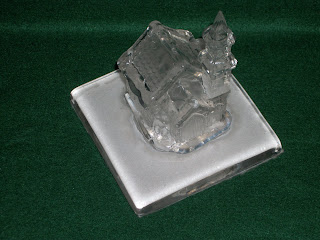 You can't get more simple than this.  It's a Christmas tree ornament, a clear plaster church with the blinking lights guts pulled out and the little crossed removed from over the door.  That's glued to a five-inch-by-five-inch glass base with a piece of white felt glued underneath to represent snow or ice.  It took all of five minutes to construct and the pieces cost maybe two dollars but for all that it looks great.  I used it in a Pathfinder game as a marker for a Druid's house that was visited by a party of player characters, just to have something on the table.  By contrast, a more intricate Stronghold that serves as a Fortress, essentially a fortified Stronghold with more defensive oomph, is currently under construction for the Dwarf army.  I'll blog about the one when it is complete, or closer to it.
Posted by Mark CMG Clover at 7:30 AM