Hordes of the Things Battle Photo

I had a tough battle early this week against the combined forces of the Green Knights and Doctor Who armies.  Yes, HotTs can get rather eclectic that way.  The mighty Dwarf army was defending a territory that was ultimately lost but the attackers paid a decently steep price for the privilege.  Losses were even though I lost the battle and the region.  Now those allied forces threaten my capitol even as I am threatening their capitol several regions away. 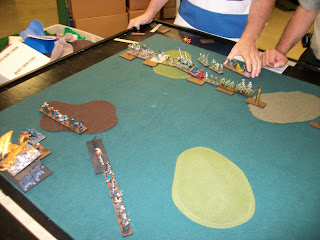