As I said in the opening to part one of this series, I love the flexibility of Hordes of the Things, particularly for building a miniatures army. Wargames Research Group did a great thing revamping their De Bellis Antiquitatis rules, originally to be used for Ancient (and Medieval) wargaming but revised for fantasy battles. The beauty of their rules for me is, in part, being able to pick and choose from across many miniatures lines to build a unique army with its own particular flavor. To that end I am building my Dwarf army.

I've always liked keeping a Dragon on the roster of Elements for a Hordes of the Things army.  I don't always use them, but having them as a potential threat and just for the fun of it seems like a good idea.  Plus, I like the way they look and their presence just screams "fantasy army" to me.  To that end, I made sure to include one on my Dwarf army roster, too.  I've had a more than a couple of different dragon figures over the years and have many currently.  For this usage, I needed one that would fit fairly well on a 60mm by 80mm base.  Often, I have noticed, dragon figures used for HotTs armies tend to overwhelm a base of this size.  While I don't like them to sprawl out over the front or sides, I don't mind if the tail prevents other elements from contacting the rear flank, though by the rules they can and certainly if an opponent wished to do so it would happen even if they had to set their own element off a bit to accomplish the combat attack during gameplay.

Nevertheless, I chose from my figures a Reaper Shadow Dragon which I had previously painted up as of the copper variety.  I decided for this Dwarf army to repaint it as a gold dragon and do something special with the base. 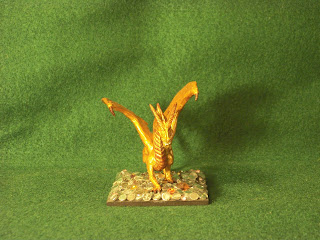 It took very little effort to slather the figure in gold over the copper (and the undertones worked for the shading), but I stepped it up using a red-gold mix to bring out even more darkness underneath. 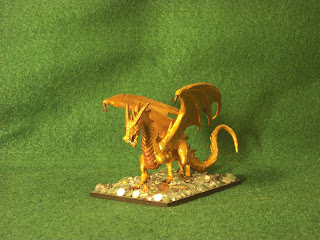 The real fun part was enhancing the base.  Using some crystal gems/diamonds picked up at Hobby Lobby in a large bin, I used the flat mirrored sides to appear as platinum coins and arranged them as a hoard. 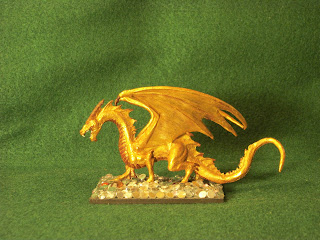 I also deconstructed some costume jewelry to garner a number of fake gems to add to the wealth beneath the dragon. 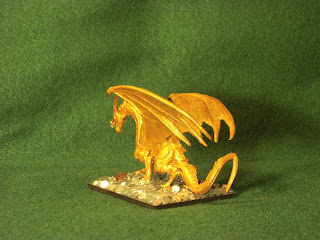 As you can see, the tail sticks out beyond the base but not egregiously so. 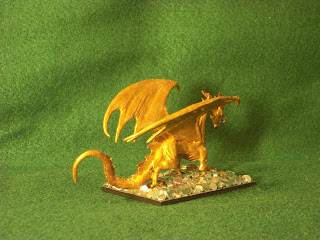 It took some time to place all of the individual coins and not have them extend beyond the base but it was worth the effort for the effect, IMO. 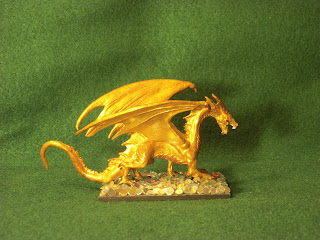 I love how this one turned out and I feel it really looks good on the tabletop for play.
Posted by Mark CMG Clover at 7:30 AM