As I said in the opening to part one of this series, I love the flexibility of Hordes of the Things, particularly for building a miniatures army. Wargames Research Group did a great thing revamping their De Bellis Antiquitatis rules, originally to be used for Ancient (and Medieval) wargaming but revised for fantasy battles. The beauty of their rules for me is, in part, being able to pick and choose from across many miniatures lines to build a unique army with its own particular flavor. To that end I am building my Dwarf army.

With most of the bigger Elements already revealed, this time I'll post about one of the two Heroes I have included in this Hordes of the Things Dwarf army build.  As I have mentioned, one of the advantages of not being locked into choosing only from one miniatures line is the creativty in how you paint and base each element.  There are also creative choices to make in simply choosing the figure, such as what I've done by choosing the cyclops for a Behemoth Element.  For one of my Hero Elements I chose an old Heritage Miniatures model of a Frost Giant from their Conan line. 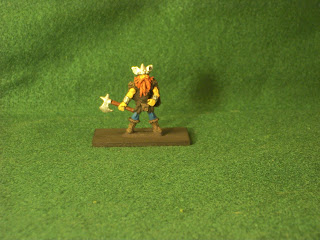 He has a decidely Dwarvish appearance and, taking my cue from Terry Pratchett's "Carrot" character, someone raised by Dwarves and very much believing himself to be a Dwarf despite being Human, I thought it would be humorous if a Frost Giant passed himself off as a Dwarf. 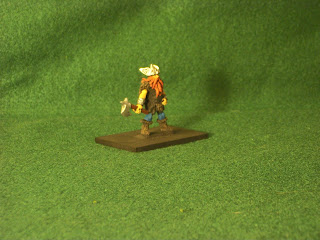 Of course, the Dwarves all think he's just the biggest Dwarf they have ever seen and naturally he rose through the military ranks to become a great Hero in the army. 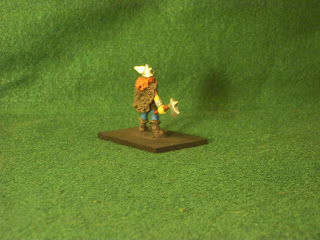 It's a straightforward paint job, making sure to incorporate some of the blue theme that I have chosen to hold this army's paint scheme together, to anchor the look across the whole army. 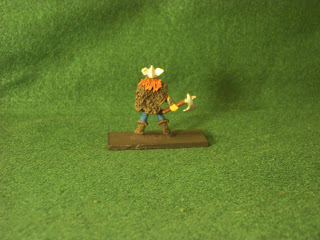 I'll do some more with the base once all of the Elements are in place, to ensure they also have a uniform appearance.  Maybe I'll even throw a little blod on the axe before it's done.
Posted by Mark CMG Clover at 7:30 AM