Joe broke out a copy of New York 1901 (2015) for us to give a try yesterday.  The rules are simple and he teaches it well, so we picked up the basic game easily and dove right in.  I had a very good time with this one.  Our only regret was making Tom Wham play this instead of a train game on his birthday. 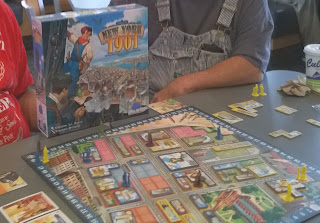 
Relive the dawn of modern New York City, the historic years that made it what it is today. Build bigger and higher skyscrapers on some of Lower Manhattan's most iconic streets. Raise one of four legendary skyscrapers — the Park Row, the Singer, the Metropolitan Life, or the majestic Woolworth — and make one of them the crown jewel of your real estate empire! 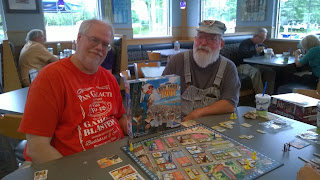 There are both tile placement and worker placement elements to this game as well as some light puzzle solving during the course of play. It has a nice random endgame Victory Point addition that helps make this game very replayable.  Though there will be times when boxing out your opponent(s) might prove advantageous, most of the game is played within the sphere of you own control, taking what positions and locations suit you best for the strategy you are developing.  I need to play the more advanced version of this game soon, I think. 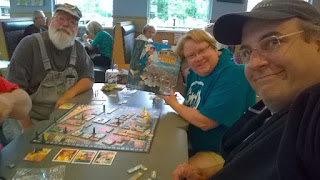