A game that has been on my shelf for some time, bought used a half dozen years ago in the hopes I could play it some day, hit my weekly game table with the new year.  Richard Berg's Medieval (2003) is strategy card game where some cards with maps on them become the board.  It probably doesn't surprise folks, those who are aware of my love of Kingmaker (1974) and Civilization (1980), that the idea of this quasi-wargame would appeal to me.  I felt fairly safe picking it up without having played it because it is a product of GMT and designed by Richard Berg, so it has a decent pedigree. 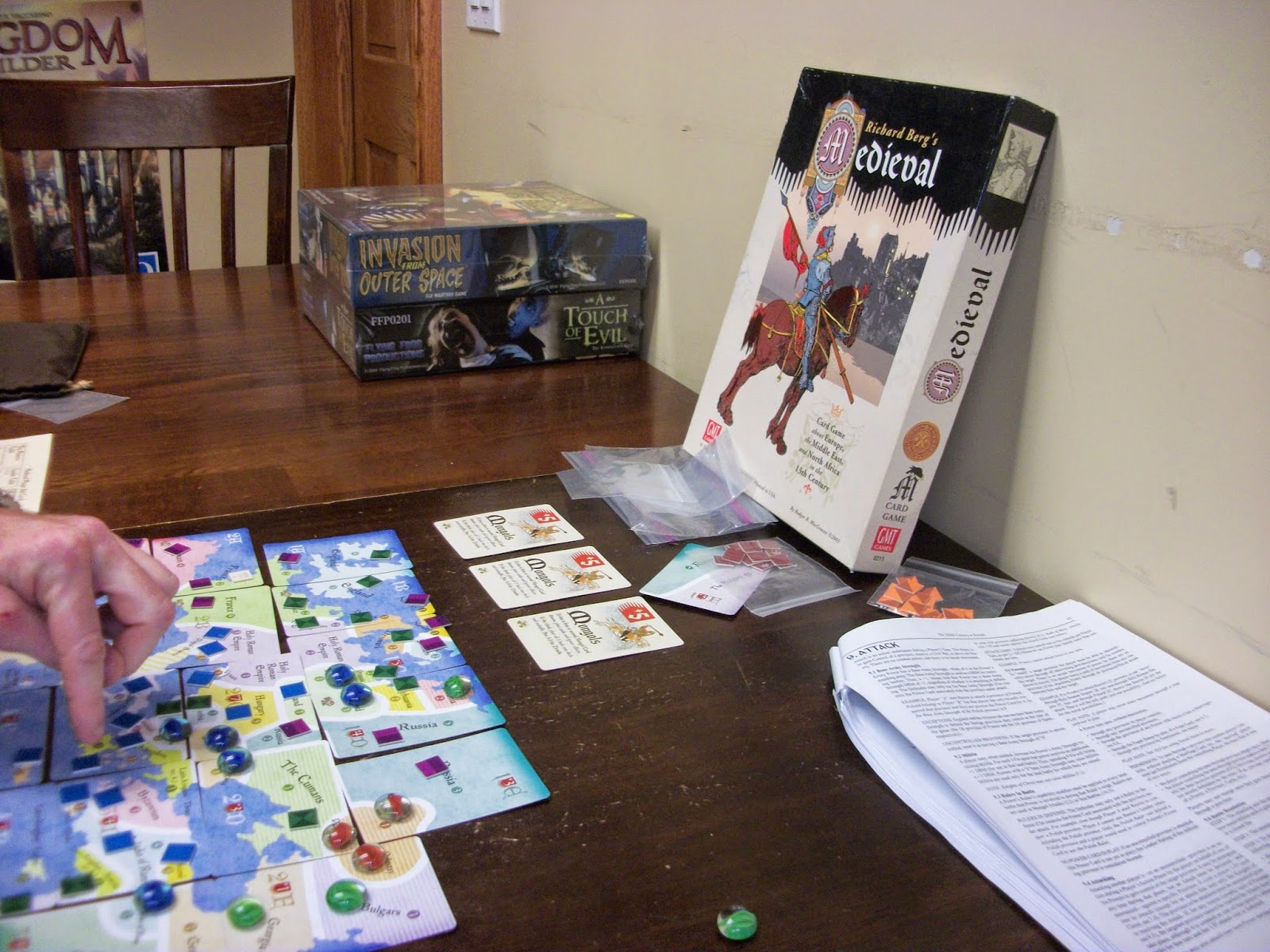 The artwork gives it an Old School feel and the rules are laid out in traditional wargame fashion.  However, players do not field armies.  The cards that become the map are divided into regions and quickly become populated by control chits and condition markers.  We actually needed some extra control chits late into the game, as seen in the photos. 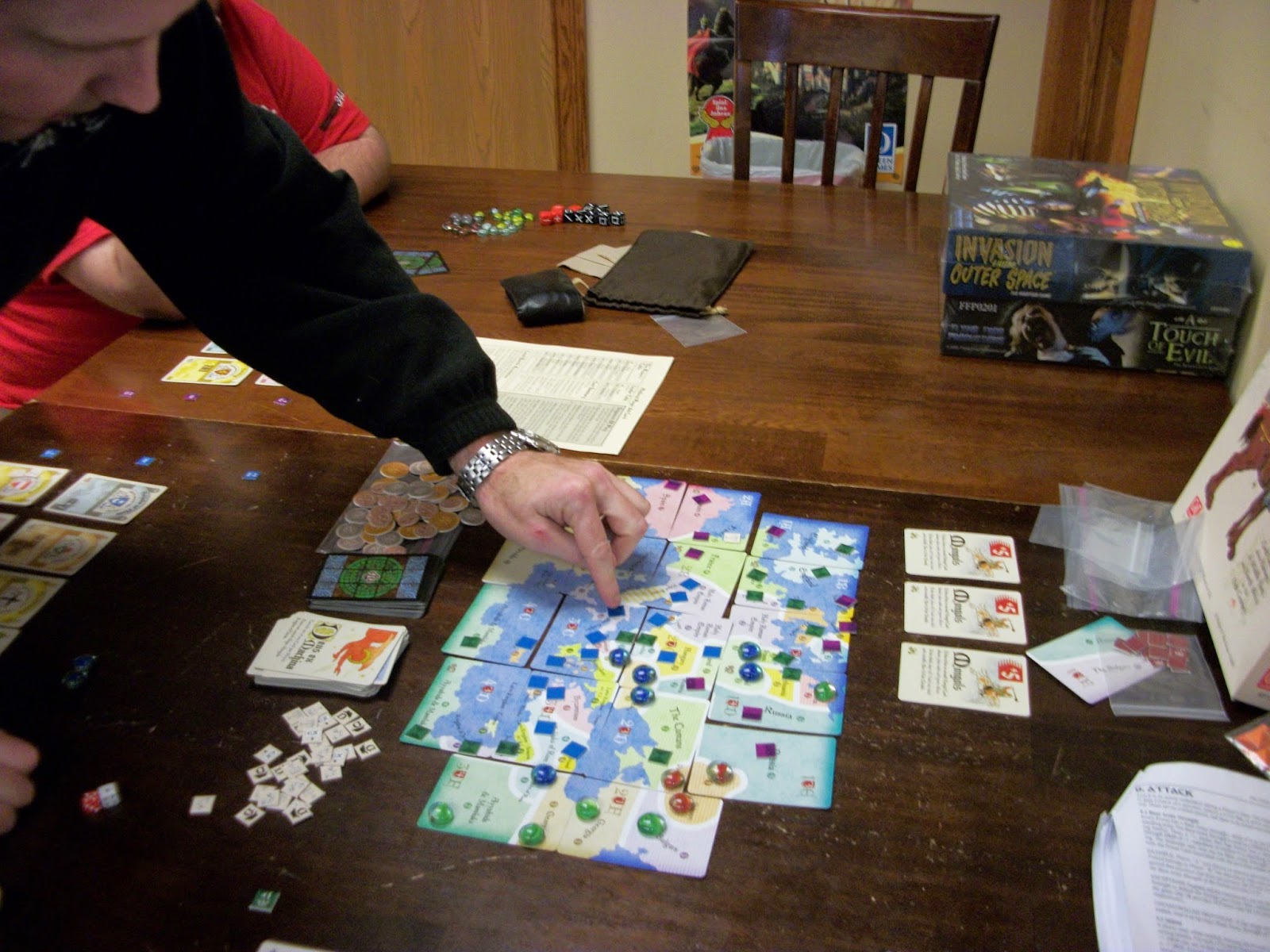 
Medieval is a card-based board game that takes players back to the turbulent 13th century in Europe, Middle East and North Africa. The cards not only represent the Powers, various capabilities, and events that the players use to gain victory, but they also provide the playing board, a map that is divided into 19 Cards, only 8 of which start the game in play. The rest of the Map Cards - and the map - come into play randomly, but at the players' pace.

The remaining cards are for the 27 Powers - countries from the strong but troubled Holy Roman Empire, England and France, through the various Islamic powers, down to such minor, but important, countries such as The Kingdom of Jerusalem, Livonia and Trebizond. Even such mysterious and far away areas as Polovtsy and The Cumans come into play. - and the various "events" the players use to forward their schemes.

Each Player represents an ever-changing conglomerate of these Powers, using his wiles, and the cards, to further his control over areas of Europe to win the game. There are Spies, Assassins, accusations of Heresy, Jihads, even the use of the various Knights of Christ.

And then there are the Popes. Each player, randomly, can become Pope (they're named and historical). As Pope he can arrange alliances, excommunicate players, and call for Crusades (a great way to make money).

But hovering like a very, very black cloud over all of this are The Mongols. No player knows exactly when they start to arrive, although the card play does give them hints … and some time to prepare, if they choose to heed the warnings. But when they do arrive, all Tartar Hell breaks loose, as The Mongols, also represented by cards, literally eat the map, east to west, conquering Powers, chewing them up and making them disappear from European view.

The winner is the player who survives the onslaughts of religion and the Mongols to control the largest part of 13th century Europe.

Medieval is for 3 to 5 players and takes around 2 hours to play, once you've learned the system. It comes with 110 cards, lots of little pieces, and coin-shaped florin markers. It took us quite some time to work through the rules even after doing some pre-session online research on the game.  I think we could drop our playing time to the two hours suggested with a few more plays but new players should be ready to give up a full evening to early efforts.  The uncertainty involved in how soon the game might end looms less large later in the game (a three player game, at least) then we expected.  Our final VP tally was 44 to 43 to 41.  Only two map cards had been destroyed by the invaders that end the game out of, potentially, more than half the board, so that struck us as surprising.  There was very little territory unclaimed and I think it likely that we attacked on our turns with about a 95% frequency.  While it might seem easier to pick up uncontrolled areas, and it was, using attack opportunities on them necessarily takes players away from whittling down opponents.  When all the players become wealthy to a certain level, concentrating attacks only on uncontrolled regions increasingly becomes the only viable option, less a player leave themselves too vulnerable.  Still, a few more sessions will be needed before confirming such ideas. 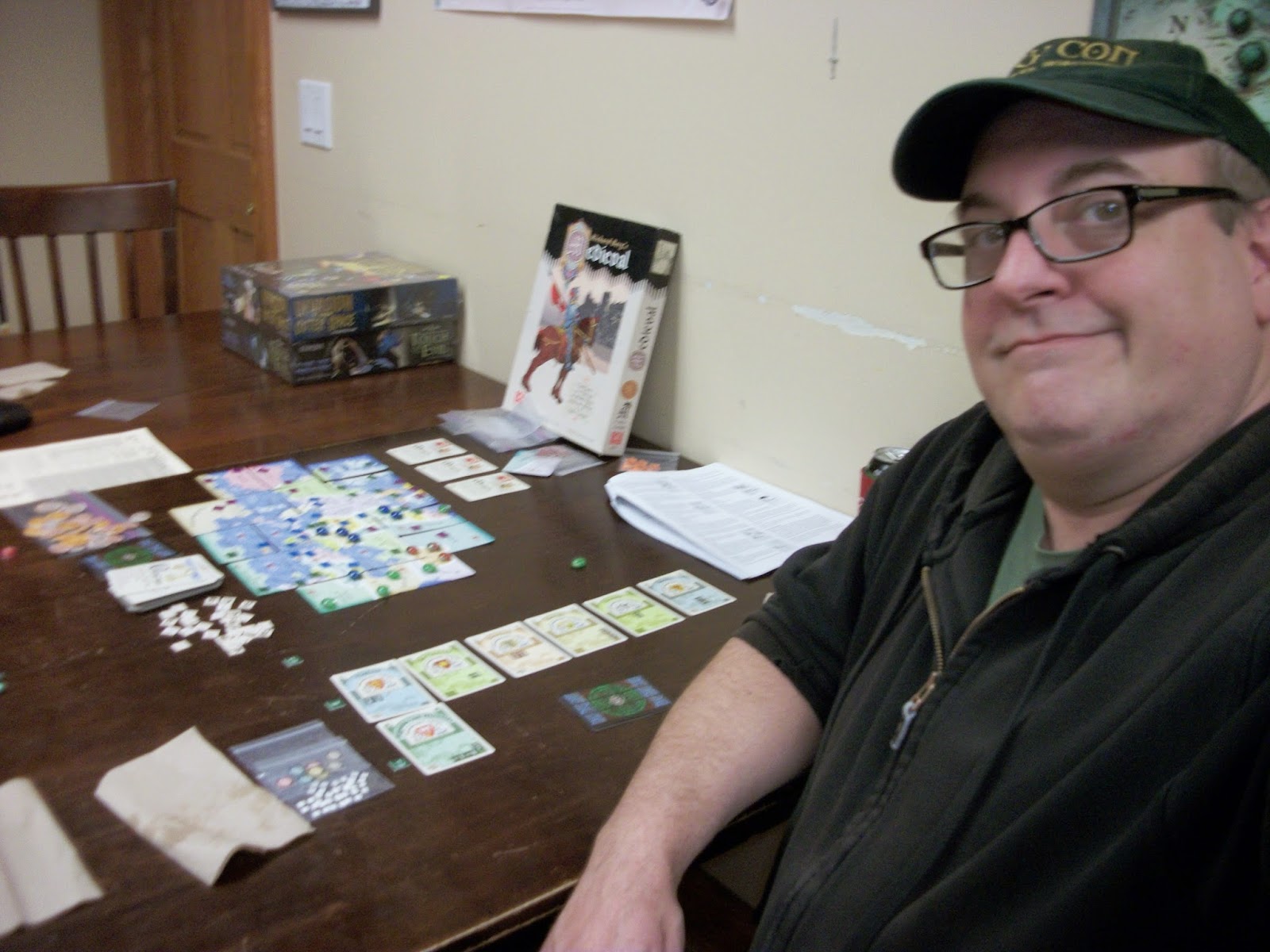