A Sound Trouncing - Hordes of the Things Battle Report

Ouch!  I got seriously trounced in my recent battle of Hordes of the Things.  My Dwarf army was defening a territory wrested back from the invaders just last turn.  This is a pivotal region right on the doorstep of the Dwarven capitol.  It could have gone much worse but it was such a decisive victory for the opponents that it must be designated as a massacre.  My early set up felt strong but proved ineffective in the end. 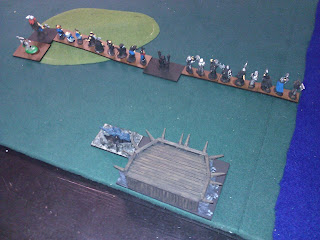 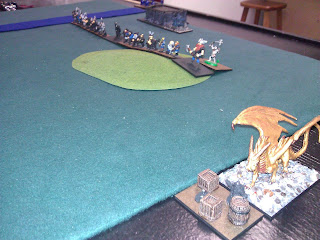 I made a blunder with my Flyer in the early going, having misunderstood a rule about enemy troops being able to simply move under them, and it got worse from there.  I thought I had a pretty solid line but had my two Heroes too far left to react when he managed to get round the end of my Blades on my right with his Hero General.  Couple that with his their good command pips and me getting too few to respond efficiently, and he just chewed up my line one element after another.  The few desparate attempts I made at stemming the tide, and one shot I had at their General which might have gotten me back into the game, came to naught.  It really was as one-sided a battle of which I ever found myself losing.

I retreated my 3FP to my capitol, so that can be fairly secure for next turn, but the loss of its neighboring territory does present other problems strategically.  Fortunately, one of my allies was able to take another key territory and free up additional forces on the same front whilst threatening the capitol of a member of the opposing aliance.  Next turn could be really big for a lot of reasons!
Posted by Mark CMG Clover at 7:30 AM