Hordes of the Things - Battle Report for the Dwarf Army

The Hordes of the Things Campaign has been less than stellar for the Dwarven army.  Several key losses and bad luck on the dice for my allied support has left me with my back to my capitol, even as I was striking toward the enemy capitol for most of the game.  Now in turn nine, a victory was needed today to stem the tide.

It was a 5FP on 5FP battle in Region A40 (steppes next to the lake) with Dwarven forces of attacking and Yaro's alien encroachers (4FP of Doctor Who-ites) and Rob's advisors (1FP of High Medievals) defending. They went without bad going but included a river, two gentle hills, and a crevasse as terrain choices. The attached picture shows that I opted to put them across the river and got my chosen side. They had set the river so that it was entirely within 575p of what became their edge. If they so chose, their front edges could be at 600p and just over the river. They might have hoped I would choose the river side and set up to eliminate it from play, but I did the opposite in an effort to limit their set up and movement options. The crevasse was perpendicular to the river and on my half, presenting no trouble for set up or command line of sight for my Dwarves.

They set their Stronghold to their right as far as able and kept that side sparse with a Horde, a Shooter, and a Knight. Their four Blades arrayed across the front of their Stronghold and beyond to their left with their Spear General to the middle left of that five element group. Their Flyer and Hero were held in the backfield and second rank respectively. Their additional Blade, Knight, and Shooter, as well as their Behemoth, the last being their farthest left element, made up their left flank. They stuck their second Horde out, nose across the river, to send forth to stymie my advance.

I set up my three Dwaven Blades to my left, one side of the crevasse, and my three Dwarven Shooters to the right. Behind the Shooters, I attached my Flyer and my Cleric General. The General was meant to move forward until surmounting the top of the larger gentle hill and give full command vantage. To my right, I grouped my two Heroes (and attached them to start on the right of the Shooter group. The Lurker and Dragon began off the board, as per the rules.

The first ten turns were played in less than a half hour by the store clock. Both sides rolled an abundance of ones and twos. On turn three I rolled a six and brought out the Dragon. I moved steadily forward, favoring my pips on the Shooter group but moving them only 200p so the Cleric General could keep up but also to give my opposition a chance to react to my set up. As I hoped, they spent most of their pips shifting their entire army over to their left by about 350p, one element at a time. Several turns in, they pushed their Horde out to get in my way but I angled my Shooters and popped the Horde on the first shot. This also played into my strategy because I wanted to find a way to shift my forces to my left by a couple of hundred paces.

Angling my Shooters to take the shot on the Horde allowed me to do so without drawing attention to the move, then also shifting the Blades over to my left to get around my Shooters seemed like a reaction rather than a plan. Once they were far enough forward to prevent a river crossing by the opposition, not that they would do so but I definitely wanted to prevent it anyway, I centered the Flyer and Dragon on the field to get them to waste pips in their back field setting up zones of control to keep my Dragon from dropping in behind them (a move they have seen me do many times and that I knew they would see coming).

Now they had spent their entire first eleven turns shifting their entire army to their left to ensure I could not cross with my Heroes and Shooters. They expected I would try to flank their left and get at their Stronghold form that side but that wasn't the plan. By their staying behind their river, they allowed my Dragon and Flyer to get within 1000p of their board edge, essentially threatening their entire line with possible aerial attacks. I shoved the Blades up to the river, and then the Shooters, still 201p, just, from their line because they chose a 200p river and neither of us was sticking our toe in yet. Then in the next three turns I ran my two Heroes right across behind to my far left, their weak right flank. At this point they had moved their right flank Knight over to the center leaving a Shooter and a Horde on their right flank to defend, but also spent the pips to send the Flyer over for support. As the photos shows, they were angling their Flyer, a Hero, and a Shooter behind their three groups to keep my Dragon from dropping in unannounced and unanswered. But this was never the plan.

I had a backup plan of forcing something on their right flank with my Heroes of necessary but the real plan had always been to bring my Shooter up across from their Spear General so all three could fire in concert and drop my Flyer down behind him so he'd recoil into one their Hero and shove it off the back of their edge, but now the Hero was angled. I was glad I hadn't rolled five pips in the previous four turns or I would have popped the Hero and then probably lost the Flyer, a fair trade but not a game winner. On turn sixteen, less than an hour into the game by the store clock, less than fifteen minutes off my time and about twenty minutes off of their time, I shoved the Shooters into the river, launched the Flyer behind their Spear General and beat them on the roll by one to claim the victory (and victory point!). They subsequently shot the Flyer out of the air with their nearby Shooter. 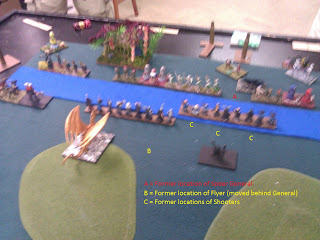 They rolled a three which lost Yaro 1FP, I rolled a four, avoiding any losses, and they retreated their 4FP to Region A39. Sixteen turns, less than an hour real time, about a combined forty minutes off the game clocks. I believe my allies called for alacrity? In a campaign with many battles, more lost than won, and all of them teetering on one or two die rolls, this was a victory I really needed.
Posted by Mark CMG Clover at 7:30 AM