There is a nifty article on lavoixdunord.fr regarding "Montreuil : la plus grande mise en scène de Playmobil au monde" which I've translated to "The Largest Staging of a Playmobil Battle (World)."  I couldn't get my browser to translate the article, so while you will need to check it out on their site to enjoy all the pictures, I have translated it through Google and made some adjustments, then presented that version below.  See the original article here! 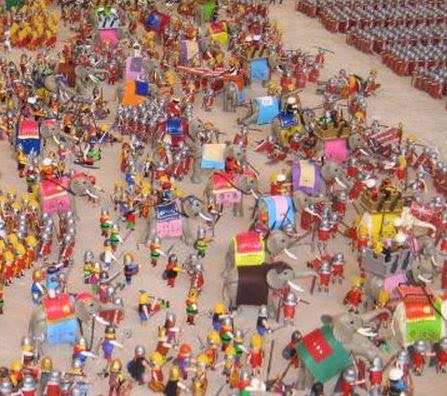 This is awesome, breathtaking, both fun and historical. It took 15 thousand characters more [than] 5000/4000 animals/horses to reconstruct the Battle of Zama on a stage 21 meters long and 8 meters wide, covered with 800 kg of sand. All made entirely of Playmobil [figures/sets]. This is, to date, the largest staging [of its kind] performed in the world!

Ten people worked for twenty-four hours to install this diorama of the second Punic war in 202 BC, the Roman legions opposed to one who later became Scipio Africanus and the Carthaginian army of Hannibal. A daunting battle that ended with the defeat of Hannibal, despite the presence of its 80 combat elephants.

The Grand Chamberlain of the diorama, Jean-Michel Leuillier, [well-known] collector [of miniature figures] from the age of six years. Enthusiast for over forty years, he has [shared] his passion [with] his wife Isabelle and their son Eric. For [this] feat, achieved in Rheinberg in Montreuil, Leuillier received support Montreuillois volunteers, Arras, Yann Hillairaud came from Saint-Jean d'Angely, Thierry Vanderieviere Taverny and other enthusiasts pageants [presenters].

The ramparts, the port and the market

This incredible scene reproduced in 1/5th scale will be visible from May 1 to 4 in Rheinberg and Jean-Michel Leuillier will be happy to comment on the battle whose balances have been complied room [which has been adjusted for the space]. Roman and Numidian cavalry were superior in number, while the Carthaginian infantry exceeded the Roman army. You can see the walls of Carthage, harbor, market Isabelle has installed itself [in evidence]. And even though the city was actually 160 km from the battlefield, this bulwark [a] well balanced view.

One round tray [a single viewing] is not enough to appreciate the work done. Jean-Michel Leuillier had already had the opportunity to stage his Playmobil in various rooms but this is the first time he has such a space.

At the end of the month, the church will Bovines [lost me here, perhaps will add on in the?] showroom for [an additional?] 10,000 people and animals on the occasion of the 800th anniversary of the famous battle. Then in September, the Battle of Saint-Omer 1340 with 6,000 people and animals will be restored. In October, we can see the camp of Napoleon Wimille.